Choirs for Cancer brought together 10 choirs and more than 300 singers in a moving community tribute to those whose lives have been touched by cancer. The event, attended by more than 700 people, was held in O’Reilly Hall in University College Dublin on 4th February 2020, to mark World Cancer Day.

Choirs for Cancer brought together cancer patients, advocates, survivors and family members to share the story of their cancer journey. Cancer researchers also spoke of their motivation and progress towards finding new ways to prevent, diagnose and treat this devastating disease.

These powerful stories were interspersed with inspirational songs by 10 choirs from across the island of Ireland, many of whom were linked with cancer support centres, or had lost family members to cancer. Contributors included Mount Sion School Choir from Co. Waterford; the ARC Dublin ‘ARC Angels’ choir; the Healthy Harmony choir from Ennis; the Sing for Life Choir from Cancer Focus Northern Ireland; and the UCD Community Choir, among others. Each choir sang a song with a special meaning to them on the themes of care, hope, strength, love, loss and community, followed by a combined choral performance. Contributions from choirs, patients and well-wishers unable to travel on the day were featured in video clips shown in between performances. The event was co-hosted by RTE broadcasters, Miriam O'Callaghan and Marty Morrissey.

One of the highlights of the day was an emotional rendition of ‘Don’t give up on me’ from Mount Sion Choir, which they dedicated to terminal cancer patient John Wall, who, in his own words, is “Living with cancer, and not dying from it”. John was in the front row and the first to rise for a spontaneous standing ovation. He later said “Words just can't describe how honoured I was to hear Mount Sion Choir sing today. One of the most powerful & inspirational events I've ever attended”. Another high point was the powerful final group performance by all ten choirs, singing the song ‘Something Inside So Strong’ in one united voice.

Overall, the event was a resounding success, with overwhelmingly positive feedback from both contributors and attendees. One choir member later commented “Music is so powerful in so many ways and especially ensemble singing.  I believe you have found a very special format with which to celebrate everyone whose path crosses cancer, in whatever form that may take”.

The event gained significant traction on social media (84,000 mentions of #choirsforcancer2020), and photo and video content featured on a number of media outlets including the Irish Times. The event was also chosen to feature in the World Cancer Day highlights video, which showed clips of selected events from around the globe.

This cancer awareness event was timed to coincide with the 20th anniversary of World Cancer Day, the global uniting initiative led by the Union for International Cancer Control. One in two people in Ireland today will develop cancer during their lifetime. The theme of World Cancer Day is 'I Am and I Will' – a statement of who you are and what is your personal commitment to act. It is a powerful reminder that we all have a role to play in reducing the global impact of cancer.

Choirs for Cancer was jointly organised by Precision Oncology Ireland and The Patient Voice in Cancer Research.

A short video of the event can be found here: 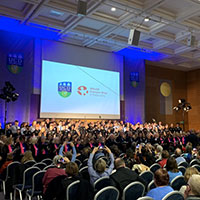 Mount Sion School Choir, Waterford City (Song: ‘Don’t give up on me’)

Solas Cancer Support Centre, Waterford (Song: ‘You are my sunshine’)

Group Performance: ‘Something Inside So Strong’